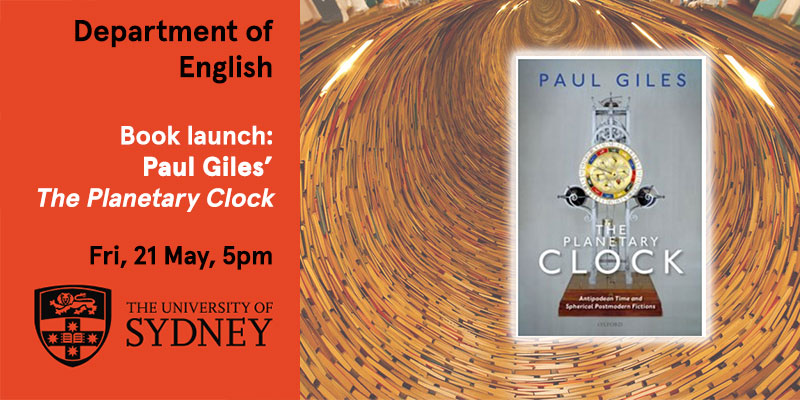 Join us this Friday for the launch of Paul Giles’ latest book The Planetary Clock. The book examining antipodean time and spherical postmodern fictions will be launched by Simon During. The reception will be hosted by Susan Lever.

The event will also be streamed live via Zoom starting at 5pm.

The theme of The Planetary Clock is the representation of time in postmodern culture and the way temporality as a global phenomenon manifests itself differently across an antipodean axis. To trace postmodernism in an expansive spatial and temporal arc, from its formal experimentation in the 1960s to environmental concerns in the twenty-first century, is to describe a richer and more complex version of this cultural phenomenon. Exploring different scales of time from a Southern Hemisphere perspective, with a special emphasis on issues of Indigeneity and the Anthropocene, The Planetary Clock offers a wide-ranging, revisionist account of postmodernism, reinterpreting literature, film, music, and visual art of the post-1960 period within a planetary framework.

By bringing the culture of Australia and New Zealand into dialogue with other Western narratives, it suggests how an antipodean impulse, involving the transposition of the world into different spatial and temporal dimensions, has long been an integral (if generally occluded) aspect of postmodernism. Taking its title from a Florentine clock designed in 1510 to measure worldly time alongside the rotation of the planets, The Planetary Clock ranges across well-known American postmodernists (John Barth, Toni Morrison) to more recent science fiction writers (Octavia Butler, Richard Powers), while bringing the US tradition into juxtaposition with both its English (Philip Larkin, Ian McEwan) and Australian (Les Murray, Alexis Wright) counterparts. By aligning cultural postmodernism with music (Messiaen, Ligeti, Birtwistle), the visual arts (Hockney, Blackman, Fiona Hall), and cinema (Rohmer, Haneke, Tarantino), this volume enlarges our understanding of global postmodernism for the twenty-first century.

Friday, 21 May
– from 4.30pm for reception on campus
– 5pm start for virtual event via Zoom

This event will be held online via Zoom. Email us for the password.