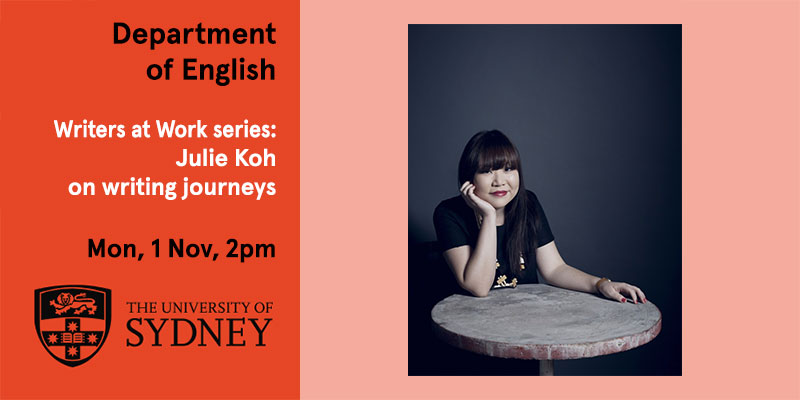 The Writers at Work series invites writers to consider: What kinds of labour are entailed in literary production and publication? What does it mean to describe oneself, or be described, as a writer? Who does a writer work for and what processes produce the literary work as we encounter it?

In the final of the series for 2021, writer Julie Koh will be speaking about her writing journey from USyd law and politics student to libretto writer via short stories and essays, with advice for young writers. Her talk will be followed by a Q&A, so please bring along any questions you may have for your own writing journey.

‘Koh balances political commentary with portraits of society’s most perversely self-defeating behaviours that are often wickedly funny, and sometimes moving. … Koh is not pulling any punches, weaving elements of the mysterious and the grotesque with the all-too-real. Skirting the ‘bleeding edge’ – to borrow her tongue-in-cheek use of a particularly apposite bit of management-speak – not one of these stories allows her readers to sit comfortably.’

Julie Koh was born in Sydney to Chinese-Malaysian parents. She studied government, political economy and law at the University of Sydney, then quit a career in corporate law to pursue writing. She is the author of two short-story collections: Capital Misfits and Portable Curiosities (UQP, 2016). The latter was shortlisted for several awards and led to Julie being named a 2017 Sydney Morning Herald Best Young Australian Novelist. Her short stories have been published widely, including in the Best Australian Stories and Best Australian Comedy Writing. She has written two radio plays for ABC Radio National and the libretto for the satirical opera Chop Chef (Riverside Theatres, 2021). She was a judge for the 2018 Stella Prize.