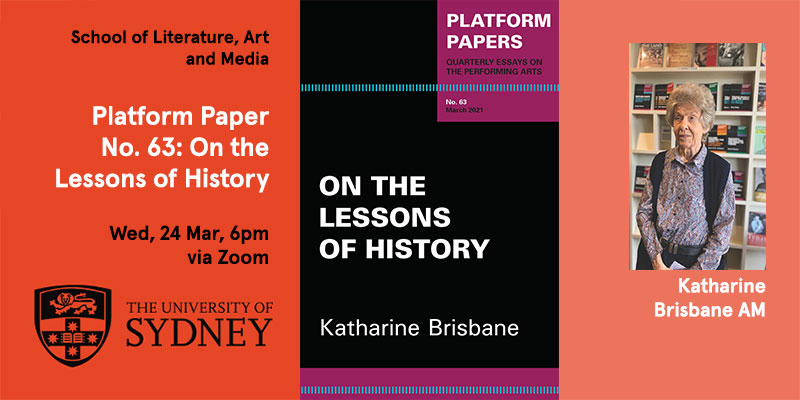 Platform Paper No.63: On the Lessons of History

The School of Literature, Art and Media will co-sponsor the launch of Katharine Brisbane AM’s new Platform Paper defining the major issues and disruptions facing Australian arts and culture this century.

In On the Lessons of History, the veteran theatre critic and publisher reviews the challenges raised by the leading artists and cultural experts who authored 62 diverse Platform Papers published by Brisbane and Currency House since 2004.

These writers have raised concerns and given insights into work practices, censorship, copyright, public policy, export, finance, environmental sustainability, welfare, indigenous work, diversity and all genres of the performing arts including film, television and ever-expanding digital media. All express the need for change.

“Currency House was conceived out of a conviction that the arts are fundamental to a civil society; that a society that does not value its own arts is a nation alienated from its own culture,” says Brisbane, aged 89.

“But the survival of our artists – and many of our public institutions – is now more precarious. This exploration left me with a major question. Why, when the Government set up a system to support the creative arts, was funding directed at the product rather than the creator?”

Brisbane’s provocative paper will be launched by departing Sydney Festival director Wesley Enoch at the Chau Chak Wing Museum, University of Sydney. The launch will be livestreamed via Zoom.

The event will introduce the new Director of Currency House, Dr Harriet Parsons, who succeeds her mother, Katharine, who has retired as its founding Chair. Julian Meyrick, theatre director and Professor of Creative Arts at Griffith University, will also speak as its new general editor. Following On the Lessons of History, a two-day convention in July is inviting all authors to debate how to create a paradigm shift in Australia’s view of the arts.

Join the livestream via Zoom on Wed, 24 March at 6pm.

Please ensure you have downloaded the Zoom application to your device before the online event.

To register for the livestream event, please email info@currencyhouse.org.au and they’ll get back with the Zoom details when confirmed.