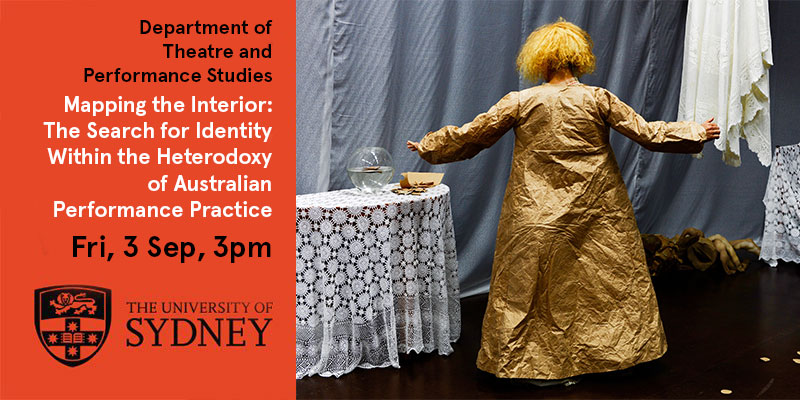 Performance Studies: The Search for Identity Within the Heterodoxy of Australian Performance Practice

Mapping the Interior: The Search for Identity Within the Heterodoxy of Australian Performance Practice

This paper examines the geography of performance, mental health and wellbeing within Australian culture to identify factors contributing to rises in mental health issues now acknowledged within the public sphere. This idiographic analysis is divided into two parts:

Part 1 –The Necessity of Space/Place.

Where performance happens impacts and challenges performers physically, emotionally and aesthetically. This is examined using complex lenses of evolving postmodernist and post-truth theories for influences on performance practice. How this corresponds with the mediatization of live performance in the digital age is considered.

This exploration expanded when encountering Ted Lewis’s forward to French philosopher, Jacques Ellul’s ‘Presence in Modernity’ 1948 (Lisa Richmond’s English translation 2016) where he writes “the root problem of our mechanistic society is essentially a spiritual one”. Contemporary definitions of secular and spiritual (religious) contextualisations need to be fluid when considering individual and cultural factors, as with Russian film maker Andrei Tarkovsky, decades after Ellul, echoing a similar sentiment in his interview with Irena Brezna: “[t]he crisis in our civilization comes from imbalance … a discord between material and spiritual development”.[1]

A peripheral focus seeks to discern if the concept of ‘presence’: exists as a ‘spiritual’ identity within Australian performance praxis; or as a residue from the shift in consciousness during Australia’s performance revolution in the 1970s & 1980s. Further, what has transpired in the wake of globalization? I refer to ‘spiritual identity’ here as a sense of vocation experienced and shared by a group of artists. More than limited to motivating their work, how this ‘spirituality’ frames that work in response to ‘something’ (in most cases being individually defined) beyond the quotidian concerns of ‘career’, reputation, economics, or even artistic expression. For want of a better term, we might, provisionally, gather these ‘other imperatives’ under the controversial rubric of ‘the spiritual’, if only to distinguish them from the (merely) material, without necessarily signing up to an unreconstructed dualism.

Part Two – Karnak in the Daintree

The indigenous space explored here expands upon aspects in my Masters project The Shock of Presence: Peter Brook and Jerzy Grotowski and their Influence on Australian Theatre (Johnson 2017) through the work undertaken by Diane Cilento in the 1990’s at her 400-seat Karnak Playhouse in the rainforest of Far North Queensland: Specifically through the laser show, Creation produced in collaboration with the local Kuku Julani indigenous community,

Jeremy is a NIDA graduate and has worked as a Director /Actor and Playwright in Sydney and Houston. His plays include: Direct From Broadway, Bohemian Grove, The Virtuoso, Speak English or Die! and recently My Friends, The Rothschilds’. He completed his Masters by Research ‘The Shock of Presence’ in 2017