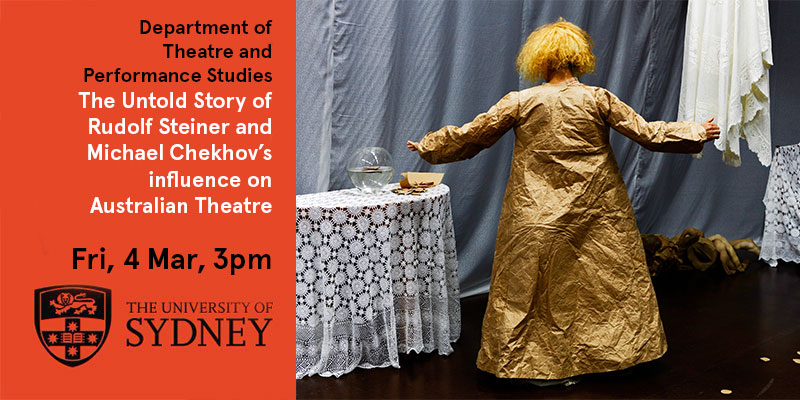 In Australian culture, Rudolf Steiner’s philosophy, practices and aesthetics have been both a significant source of individual inspiration, as in the artwork of Roger Kemp (1908- 1987) and in the novels of E. L. Grant Watson (1885 – 1970) and also an enduring fringe sub-culture within Australian theatre history. For there have been four principal waves of Steiner theatre in Australia from 1930 to the present. Yet the mainstream Australian theatre, in so far as it is aware of Steiner’s approach, sees its usefulness as an alternative ‘voice’ training only. This paper will address that misconception and make a case that Steiner’s indications constitute a unique and comprehensive art of acting and although the pioneers bringing the work here lacked the resources and professional theatre staff of the Steiner centre in Switzerland, their skills and talents had been well tempered in the wider world of contemporary artistic practice whether it be from the eye and hand of Frank Lloyd Wright or Moscow Theatre Art as mediated through acting teacher and star performer, Michael Chekhov.  To this day, the Chekhov movement has struggled how to integrate Steiner’s speech work into the Chekhov technique (Oram, 2020). The Australian experience was however quite different. For its practitioners and pioneers were and are not only deep students of Steiner, hence well acquainted with the hidden curriculum of Anthroposophy, but also highly trained in both Steiner’s eurythmy and speech and  in addition had  an intimate knowledge of the Chekhov technique (Anderson, 2011). This has enabled them to rather than integrate speech into the Chekhov technique, instead integrate Chekhov’s genius into what they saw as the larger world of Steiner’s Speech and Drama indications – the Gesamkunstwerk(total work of art) of Steiner.

Neil Anderson is a high school teacher at Aurora Southern Highlands Steiner School and a PhD candidate at Sydney university. He trained in the Steiner approach to Speech and Drama under Mechthild Harkness in Sydney in 1980’s and under Peter and Barbara Bridgmont in London in 1990’s. He has had direct experience of the Michael Chekhov technique by getting it first-hand from two who had known Michael Chekhov personally – Mechthild Harkness and Denis Glenny. He is a storyteller, speaker of poetry and performer/producer with the theatre company, Harken Theatre.

Online via Zoom and on campus. To register, please email glen.mcgillivray@sydney.edu.au.